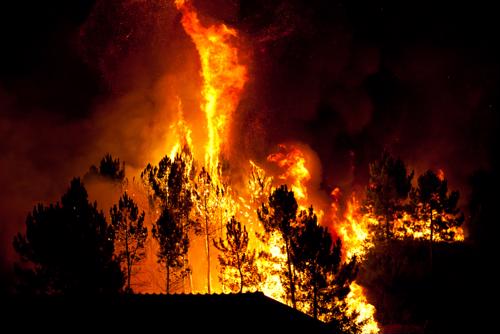 Cross-functional emergency response teams in California are struggling to contain multiple large-scale wildfires, including the Mendocino Complex blaze which currently measures more than 300,000 acres, making it the largest fire ever recorded in the Golden State. Infernos of this scale have sadly become the new norm across the state. Four of the five biggest wildfires in California history have sprung up over the last six years. Analysts cite drought and the development of technology as the two foremost causes of this epidemic, according to The Atlantic. Emergency response teams including firefighters, police and first responders, have borne the brunt of this disturbing development, risking their lives to contain active blazes and ensure the safety of nearby residents. In many cases, linemen are involved in these efforts as well, leveraging their expertise to manage critical electrical delivery infrastructure in the path of the fire.

Utility teams involved in wildfire response efforts encounter significant danger, an unfortunate reality Pacific Gas and Electric confronted earlier this month when one of its workers was killed while working to restore power amid the Carr fire, a 173,000-acre blaze burning near Redding, California, The Associated Press reported. Electric companies working in regions in which wildfires occur – there are active fires in approximately 15 states, according to analysts for the National Interagency Fire Center – must address the hazards that accompany this work by developing and deploying response strategies that keep field crews safe, while facilitating power restoration.

Beating the heat
Wildfires featuring flames more than one meter in height can generate on-the-ground temperatures as high as 1,500 degrees Fahrenheit, according to the University of Utah. While most linemen are not involved in operations directly adjacent to burning brush, it is likely that they will encounter elevated temperatures. In these instances, field crews should have the knowledge and tools they need to avoid injury. The Occupational Safety and Health Administration advises linemen working in abnormally high temperatures to hydrate every 15 minutes and take consistent breaks, preferably in covered areas. In addition to adopting these best practices, field crews should have access to equipment suitable for work during wildfires. Wildland firefighters, colloquially referred to as hotshots, set the standard for this special brand of field gear, Outside Magazine reported. For instance, these elite professionals are known for wearing work clothes made of nomex, a fire-resistance fabric that resembles Kevlar. This sort of clothing is necessary, as extreme heat warps synthetic fabrics, leaving the individuals wearing them enveloped in high-temperature cocoons. However, one particular accessory trumps all others, according to virtually all hotshots: water.

Cutting through the smoke
Burning forests generate massive amounts of smoke, which contains various chemical compounds – most notably, carbon monoxide. This colorless, odorless gas can, of course, poison those who inhale large amounts of it, leading to neurological damage, coma and death, according to OSHA. Even individuals exposed to CO for short periods of time develop symptoms, including dizziness, nausea and vomiting. In normal working conditions, avoiding this gas is relatively easy. However, linemen working in the midst of wildfire often encounter large quantities of the gas. With this in mind, utilities must limit the duration of field activities conducted near wildfires and equip crews with personal protection equipment when needed.

Finding stable footing
Wildfires often unfold in elevated, unstable terrain, as is the case with the Mendocino Complex fire, which has affected some of the more mountainous regions of Northern California. Linemen navigating these areas could encounter hazards that increase the likelihood of slips, trips and falls, which are among the most common workplace injuries, according to the Bureau of Labor Statistics. Linemen in difficult-to-navigate areas near wildfires must pay close attention to their movements and adhere to OSHA-approved slip, trip and fall-prevention measures. The agency advises field crews to conduct initial surveys to pinpoint any potential hazards. Additionally, heavy PPE use is ideal, especially for utility workers using bucket trucks or ascending electrical poles. Even crew members walking on supposedly solid ground must move with great care. Areas affected by wildfire may be covered in dangerous debris that can create tripping hazards. Moisture might be present as well, further increasing the possibility of slips, trips and falls. For linemen working into the night, these dangers rise in intensity, making lighting is essential.

In addition to moving deliberately, field crews should manage their equipment intelligently. For instance, OSHA advises workers to use tool belts to keep their hands free and ready for bracing in the event of a fall.

Navigating treacherous roads
The Pacific Electric and Gas lineman that died this month near Redding, California, sustained his fatal injuries in a work-related automobile accident. Unfortunately, this is not an uncommon occurrence, as more than 1,700 American workers perish in occupational transportation accidents, according to OSHA. The open road on its own is immensely dangerous. However, during a wildfire, normally passable highways and byways become shrouded in smoke. Wind might be a factor as well, for fires tend to be most active when propelled by significant gusts. These conditions are not suitable for driving. Ideally, utility companies should keep crews off the road, but this is not possible when key service infrastructure must be restored. Linemen forced brave adverse road conditions must have access to reliable vehicles equipped with emergency safety kits and other critical supplies.

Assessing the environment
Pre-deployment field assessment is perhaps the most effective strategy for keeping linemen safe during wildfires. Here, electric company managers and field leaders review data taken from power delivery assets on the ground to determine if external action is necessary. In some cases, the damage might not be significant enough to place linemen in harm’s way. However, in other instances, a field response could be necessary. How can utilities gather the data they need to perform such assessments?

Outage management software facilitates this brand of centralized monitoring, allowing electric companies to track countless assets of every type, from smart meters to customer thermostats. With these data-backed insights, utilities can make better decisions and lay the groundwork for safe operations. These tools also connect with wireless assets, including tablets deployed in the field. This capability streamlines communication, giving linemen the power to quickly connect with each other and their supervisors at headquarters.

Together, these strategies and tools can keep linemen working in wildfire-ravaged regions safe as they serve their communities amid the most turbulent outdoor conditions imaginable. Here at dataVoice International, we create software that supports this lofty goal. Our OMS platform culls wireless field assets to deliver actionable insights to personnel in the back office, along with field crews moving through their communities. Connect with us today to learn more about our cutting-edge OMS suite.